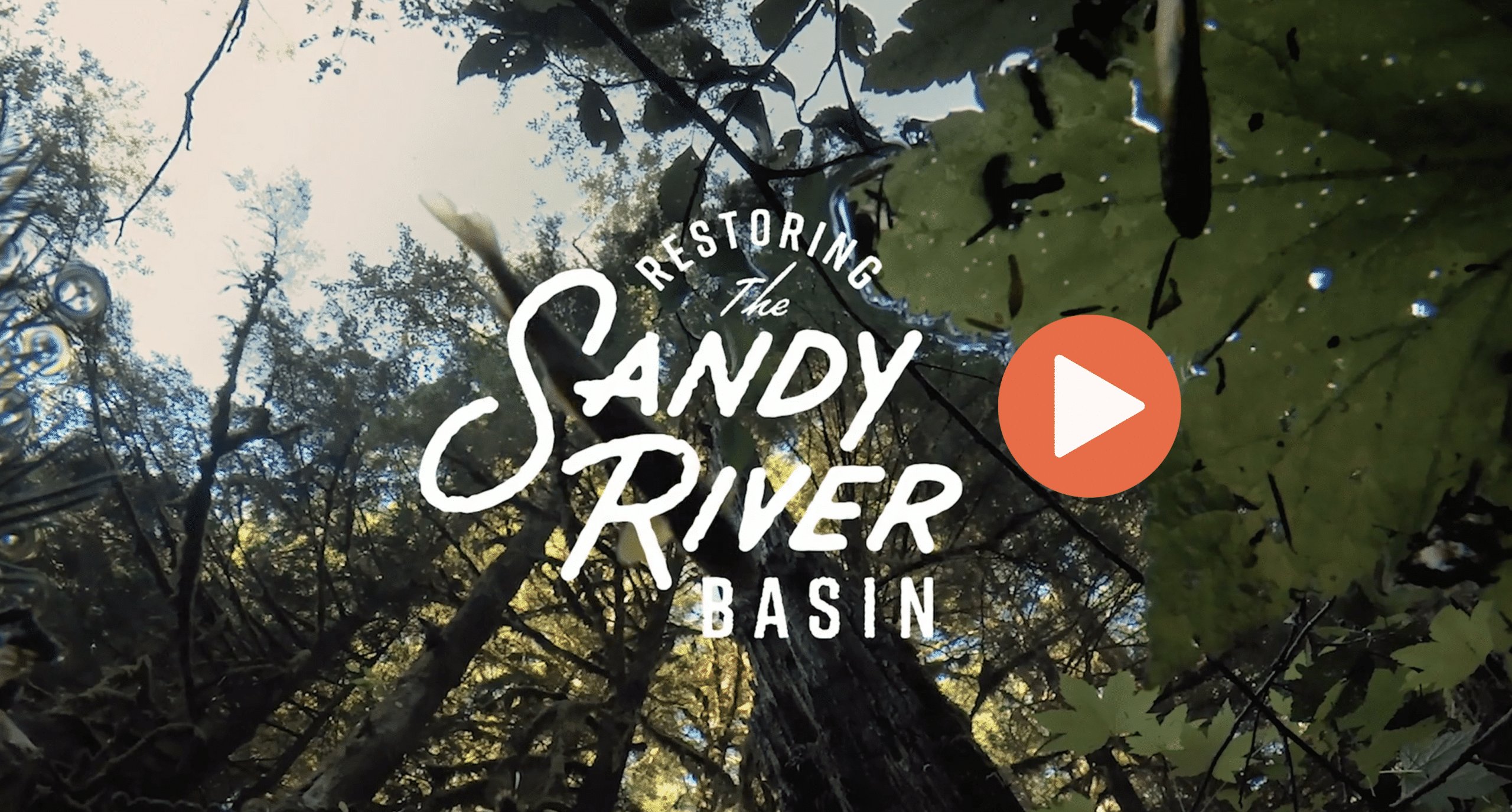 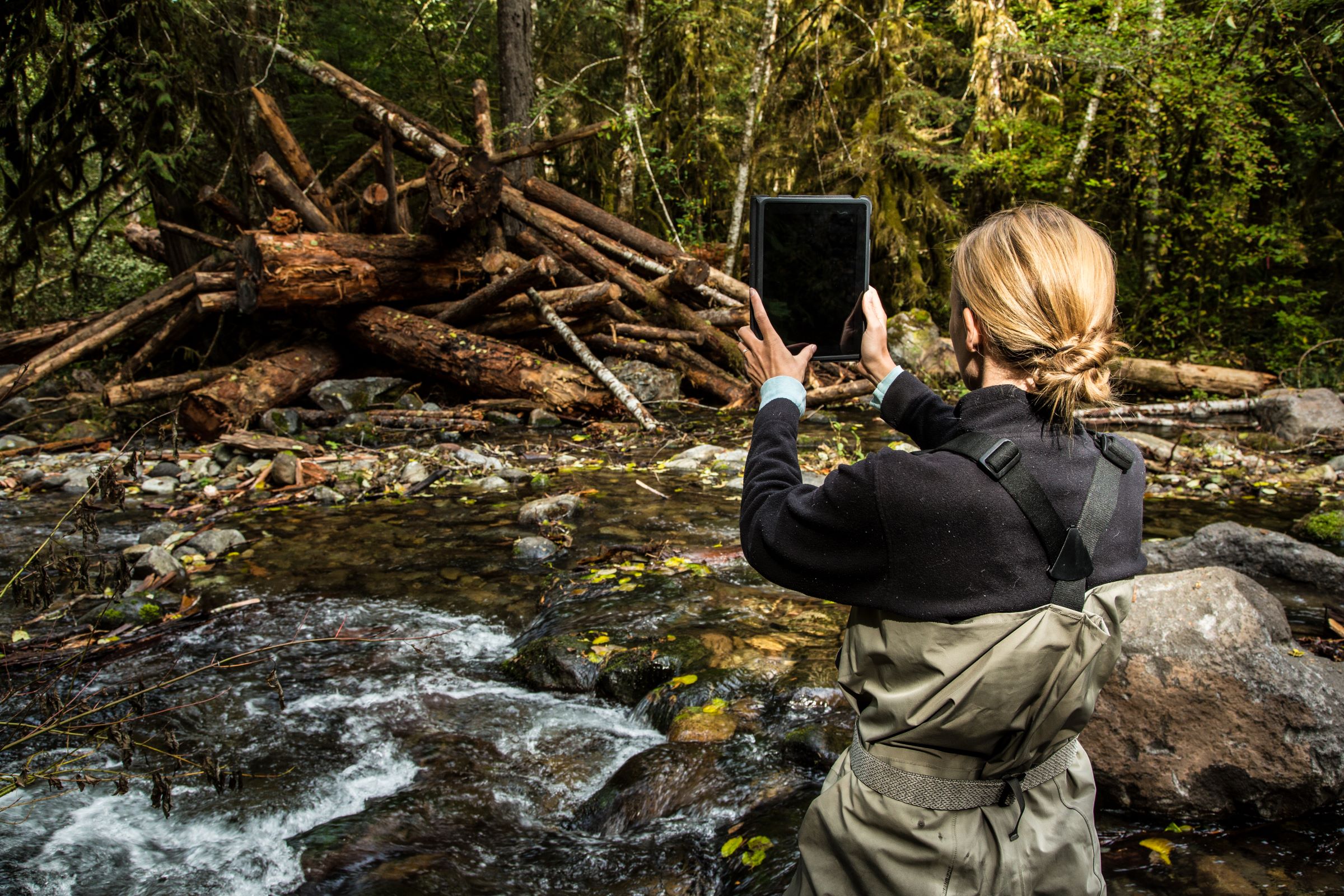 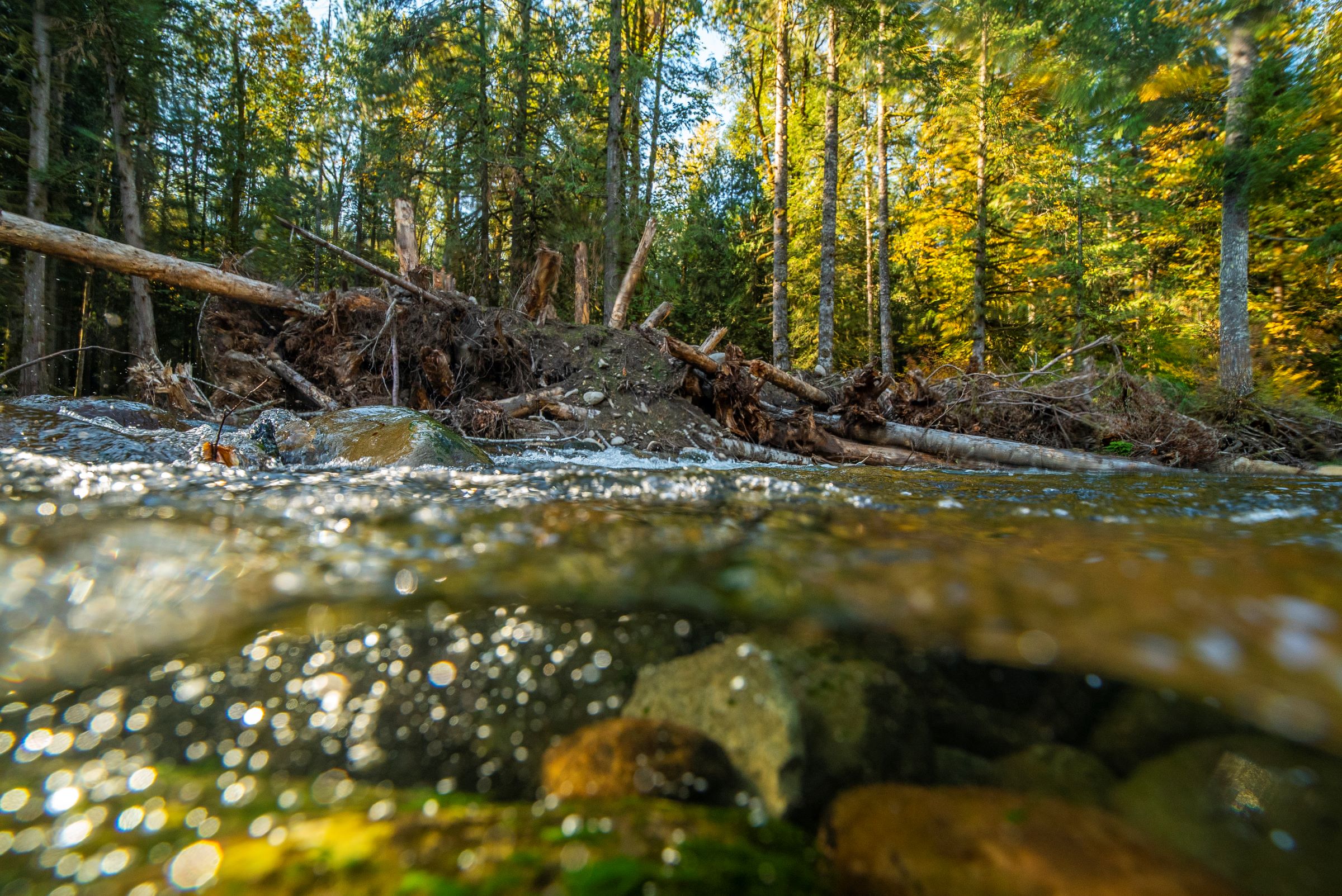 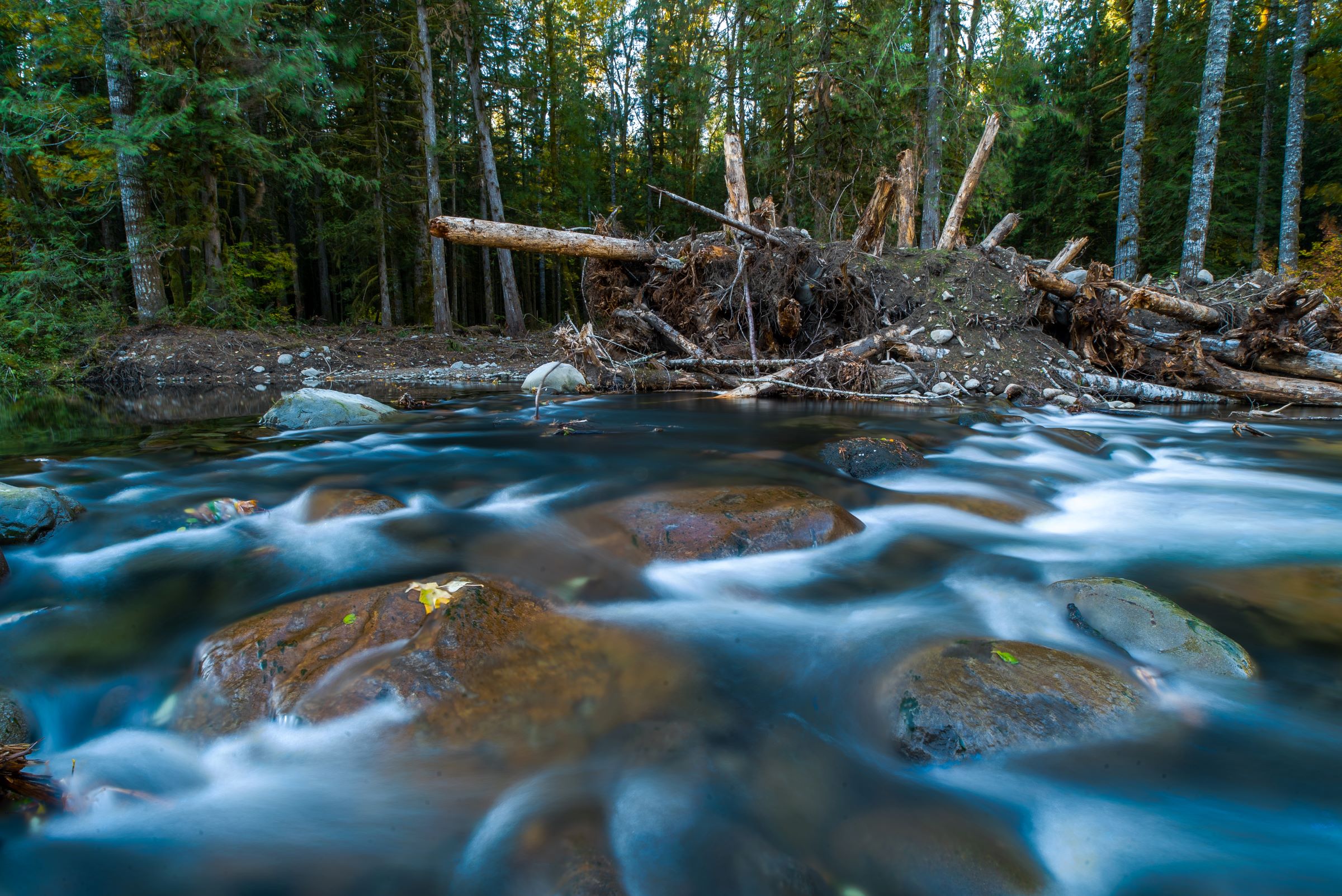 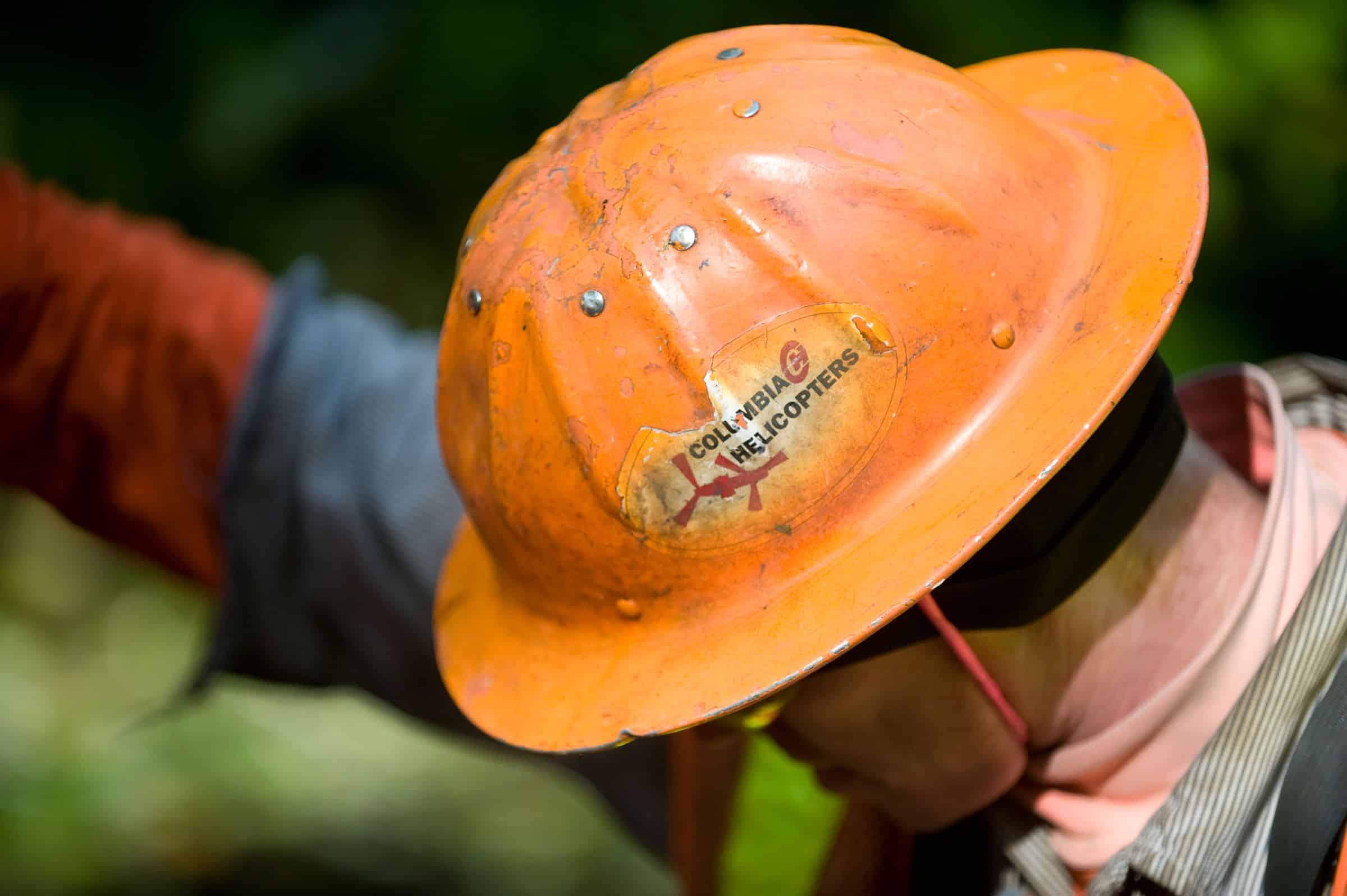 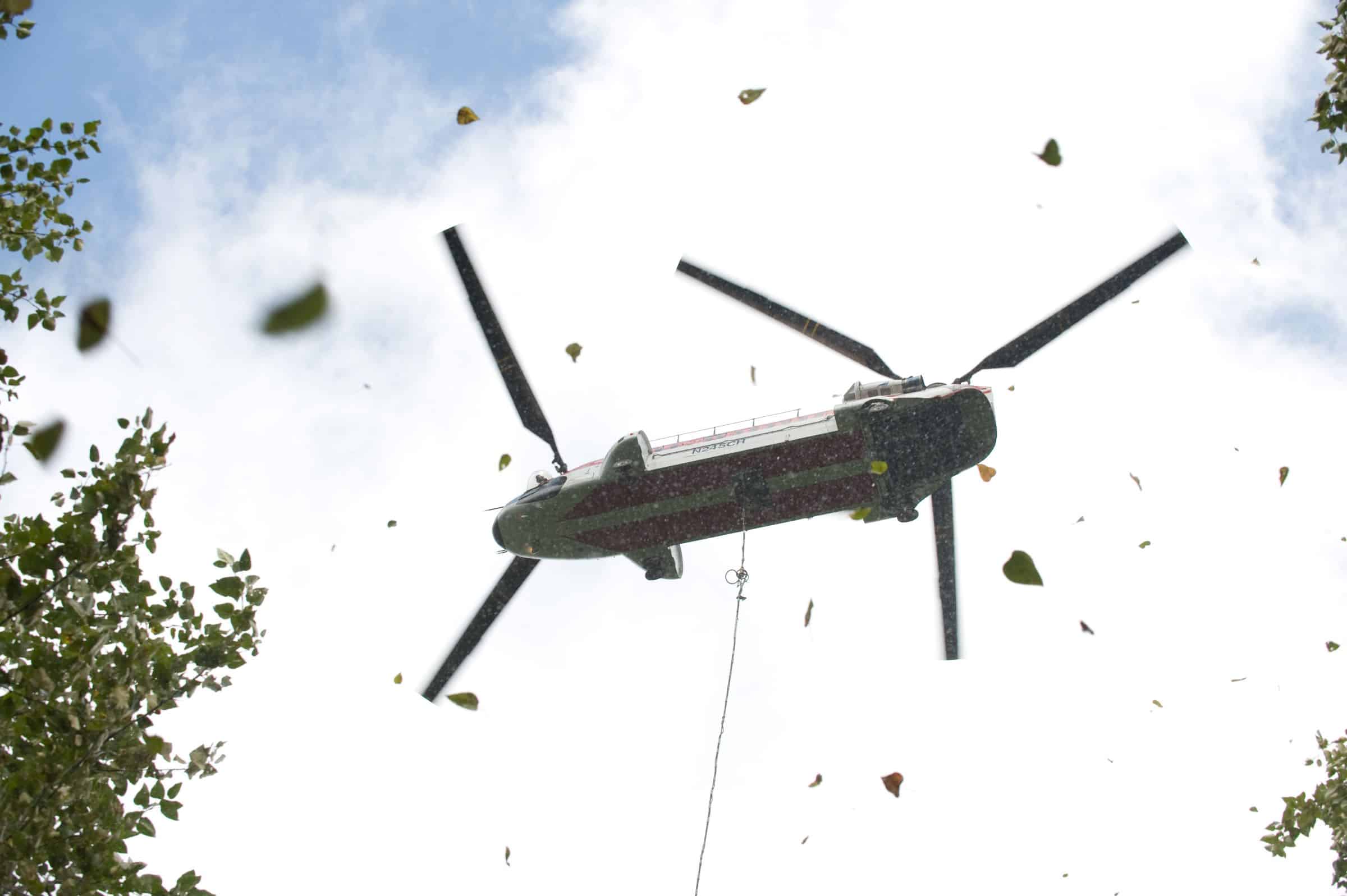 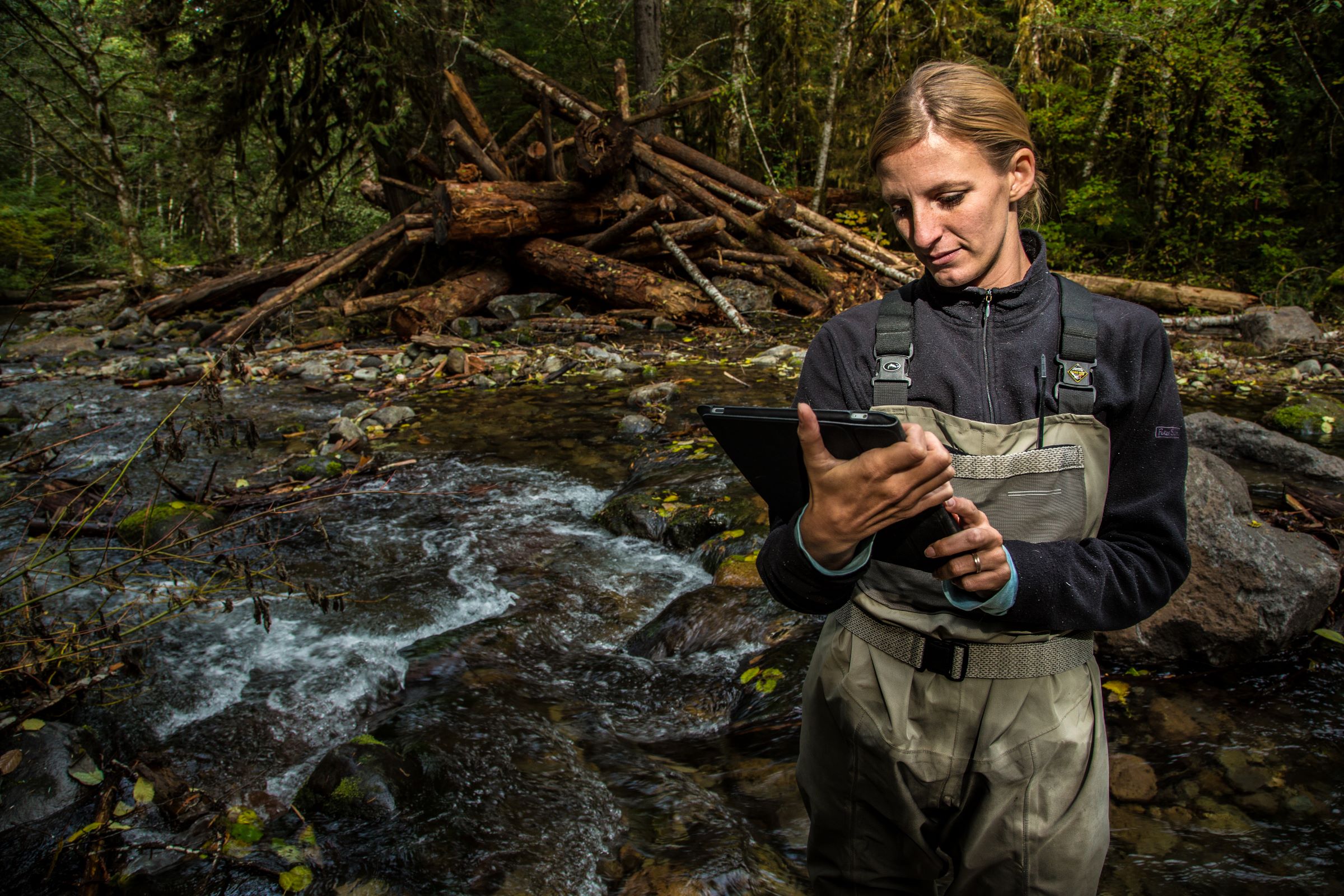 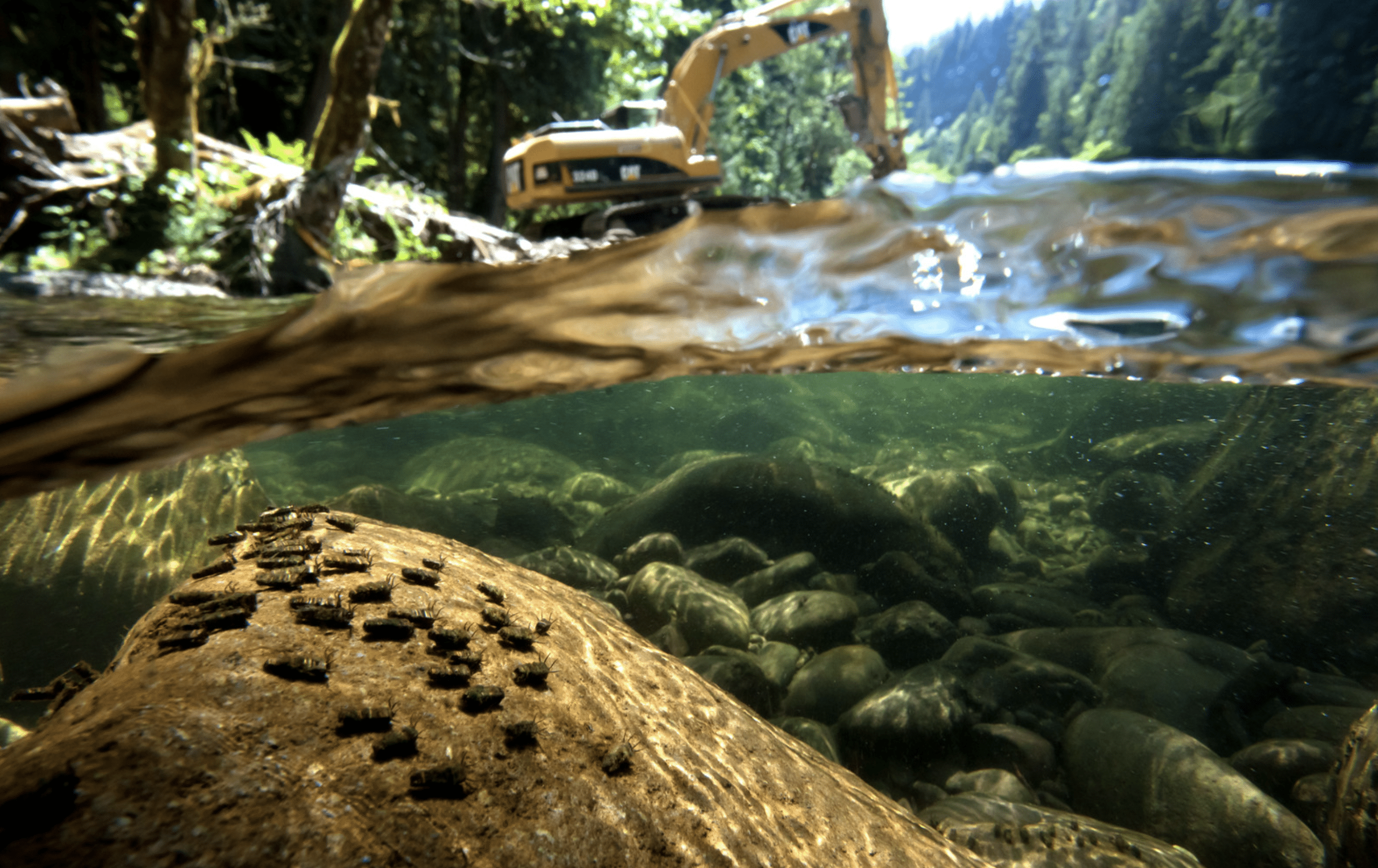 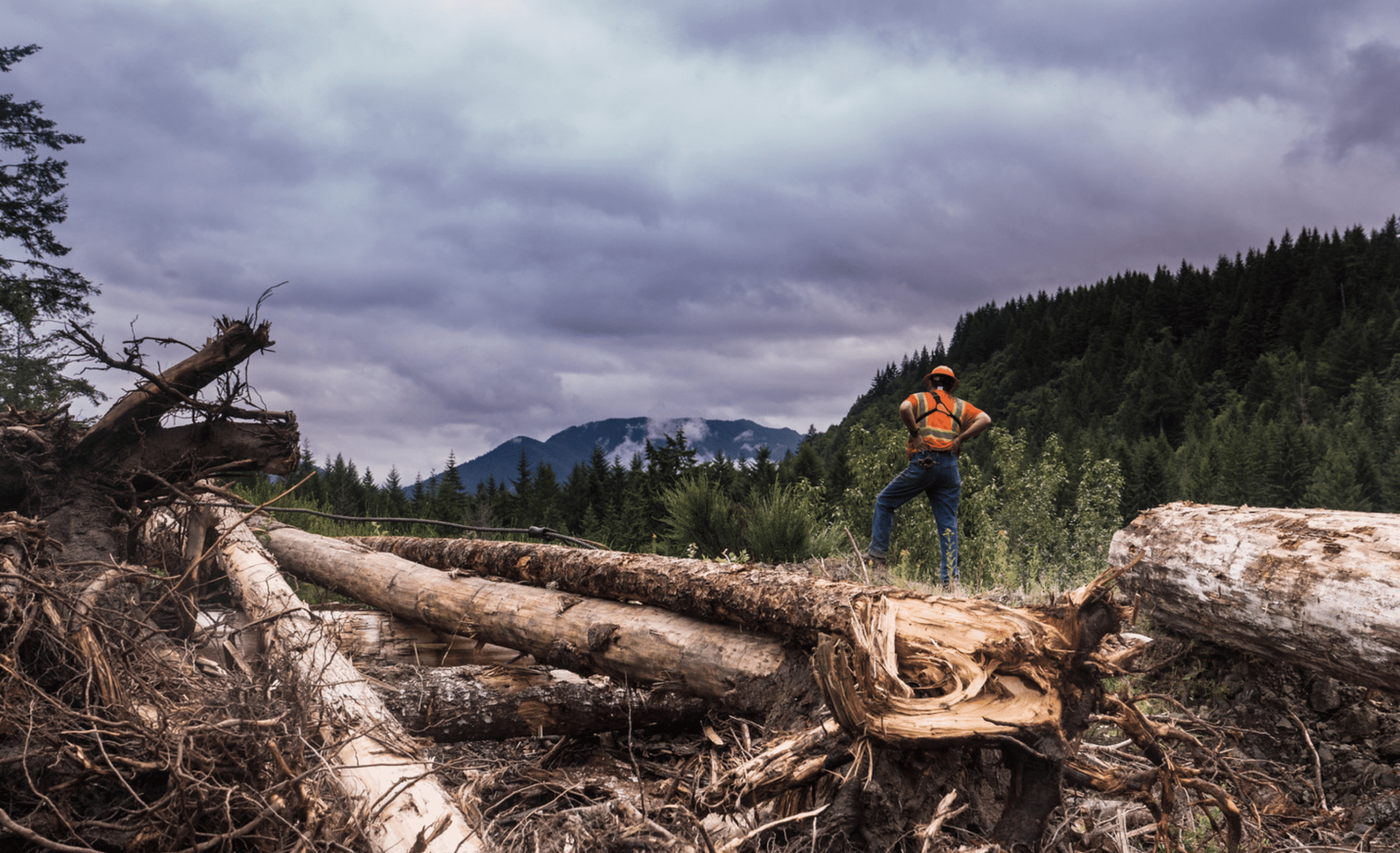 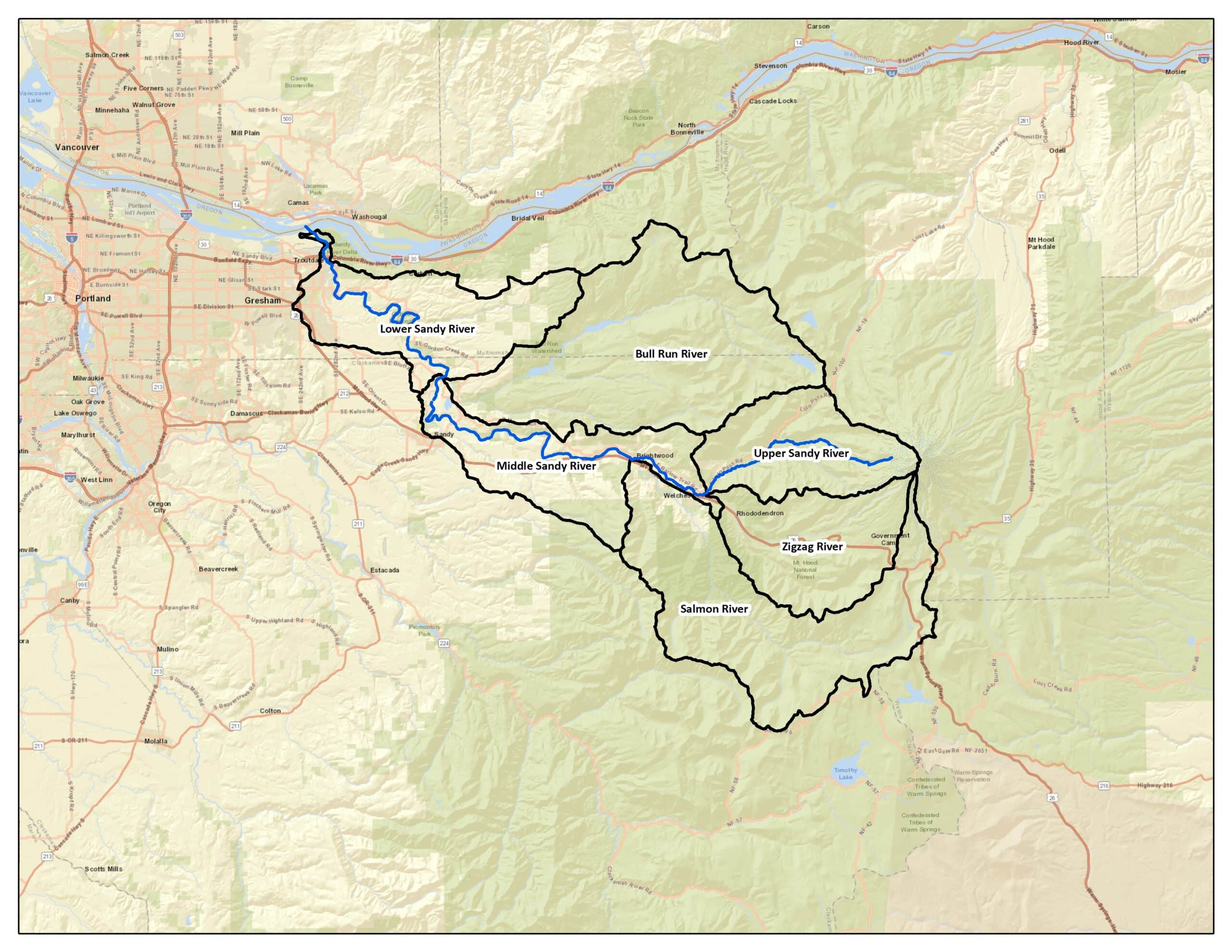 
Between owls calling, cougars roaming, and the splashing of spawning salmon, the Sandy River basin is alive. It hasn’t always been well.

A decade has passed since diligent, attentive work began to repair the impact of human actions. A group of partners, including the U.S. Forest Service, the Sandy River Basin Watershed Council, the Bureau of Land Management, and The Freshwater Trust (TFT) agreed and witnessed how the removal of large woody debris, road construction and clearcutting had led to negative consequences for water quality and habitat. But what was also agreed upon among this group was that strategic action and collaborative funding could fix them.

In 2010, TFT broke ground on the first restoration project here with a goal of making this a home again for native fish species that had become endangered in the area they were once plentiful. Today, nearly three dozen others have been implemented, along with other critical actions to improve stream function and future resilience.

“The Freshwater Trust’s work here has always centered upon understanding what this place might have been like without the influence of significant development and how best to support the native populations of steelhead, coho and Chinook,” said Mark McCollister, habitat restoration director. “We’ve always asked ourselves how this place would have functioned without these kinds of human impacts. Then, we take action to get it back to a state that supports abundant native fish populations.”

2019 efforts built on years of previous work. At the end of the 10 years of helicopters buzzing, excavators running, planning, and permitting, stream function in the Sandy had been increased by more than 3,000 functional linear feet. Last year, on the mainstem of the Salmon River, flow was restored to three side channels by reconnecting them to the mainstem, and an off-channel pond complex was constructed totaling an acre. Large wood structures were installed at the entrances to each of these features that will help facilitate the development of pool habitat and refuge for salmonids. TFT also restored large wood and floodplain connectivity at the confluence of the South Fork Salmon, and within Sixes wetland complex. More than 650 logs were flown in by helicopter and strategically placed to form 33 new logjams. The wood for the structures is collected locally from hazard trees or other projects, such as trailhead improvement. They sometimes come from nearby forest fires, including the historic Eagle Creek Fire in the Columbia River Gorge. The massive projects require partnership and coordination and often provide hundreds of thousands of dollars in business to local companies, including Columbia Helicopters, a local operator founded in Oregon in 1957.

“Our services are worldwide, but we really value the work we do here with The Freshwater Trust,” said Dave Horrax,
operations manager with Columbia. “It’s a natural extension of who we are.”

And when it comes to making this a home again for fish, they’ve let us know we’re doing a good job. Rotary screw-traps, which allow for basin scale smolt production abundance estimates and a measure of freshwater productivity, have been operating on Still Creek since 1994 and the Salmon River since 2010. Datasets from these traps show increases since the beginning of restoration work beginning in 2010.

For example, the number of steelhead smolts, young salmon, in the Salmon River have increased by 710% between 2010 and 2018.

“This basin has been a key focus of my career,” said McCollister, who has worked with TFT for 20 years. “When I reflect on the work we’ve done, I will undoubtedly get to say that I spent my time making a difference and that difference can actually be seen in the waters of my home basin. That’s a great feeling.”

Want to help The Freshwater Trust and the Sandy River Basin Partners keep working on the Sandy? Make a gift today.

Columbia Helicopters: Home for the Summer
May 1, 2020

Infographic: Uplift in the Sandy
October 1, 2018

Infographic: Where we work

Creating watersheds of the future
February 27, 2017

Over the last 11 years, TFT’s projects have directed nearly $7.3 million in restoration investment to the basin.

How do large wood structures work?

Large wood structures recreate the natural channel complexity historically found in many Oregon rivers. Large woody debris – root wads, limbs and whole trunks – in rivers or side channels helps to control flow hydraulics as well as regulate the transport of sediment, gravels and organic matter through the river system. Logs that span the entire width of the channel raise the elevation of the mainstem water level and divert the water the nearby floodplains. Large wood added to a streambank increases roughness and enhances riparian resilience. Large wood structures also provide desirable habitat for fish. The structures create pools and create a hydraulic shadow where gravel deposits on a streambed, producing ideal conditions for spawning. The pools also provide a refuge from predators or during periods when water levels are low. By mitigating flow, the structures can provide safe shelters for fish during high-flow periods.

From 2012 to 2015, the Sandy River Basin Partners have treated over 2.5 miles of mainstem river with 1,344 pieces of large wood that in return restored over 90 acres of riparian habitat with 4.1 miles of off-channel habitat including side channels, alcoves, and beaver ponds.

How are large wood structures built?

To construct new large wood structures in a straightened channel, trees can be felled on site or flown to the project areas. Trees are often obtained and reused from other areas. We get them from road and development projects, those that have blown down or timber sales. Each structure that is installed can contain between 15 and 40 pieces of wood. The wood structures can be anchored to existing trees, the streambank or streambed.

Why are invasive species bad for habitat?

Invasive species often crowd out native species and change the characteristics of habitat for native wildlife. In certain circumstances, they can also be thirstier than native plants.

Why is restoring side channels important?

At the most fundamental level, restoring and reopening side channels means fish have more spawning and juvenile rearing habitat. Side channels provide low velocity areas where juvenile fish can rear year round and also provide refuge during higher winter flows.

What monitoring is undertaken in the restored habitat areas?

Pre- and post-restoration biological monitoring has included over 20 years of continuous smolt (young salmon or trout) out-migration monitoring and spawning surveys completed cooperatively by the Bureau of Land Management, the Forest Service, Oregon Department of Fish and Wildlife, and Portland Water Bureau.

What is the resulting fish response in the restored habitat?

In Salmon River project areas, fish response was immediate and was assessed via spring Chinook, coho and winter steelhead spawning surveys and juvenile fish surveys and visual observations made by project partners. Additional snorkeling surveys have confirmed the use of large wood structures in side channels and in the mainstem river by adult and juvenile salmon and steelhead. Winter steelhead, coho and spring Chinook salmon have been observed spawning and rearing in restored side channels.

In year-over-year monitoring, from 2012 to 2015, the Bureau of Land Management-Salem District found significantly more winter steelhead and Chinook salmon spawned in gravel patches associated with the Salmon River large wood projects. During 2009 to 2015, an average of 10 coho salmon redds per mile were located in reconnected side channels within the restored reach.

How does the Sandy River Basin conservation plan set out the prioritized restoration strategy for the watershed?

The Sandy River Basin Partners formed a coalition in response to the federal listing of threatened species for Chinook, steelhead and coho. The Partner’s vision is to restore the rivers and streams of the basin for fish and for people though a coordinated basin-wide strategy built from a solid scientific foundation.

From 2001 to 2006, the Partners worked collaboratively to develop a fish habitat database and model to help assess conditions for Chinook, steelhead and coho within the Sandy River Basin. Water temperature data was added to the dataset. These assessments identified approximately 150 restoration opportunities targeted to address limiting factors for the fish, all of which were then compared to a set of anchor habitats for four fish species. Finally, the Partners completed a habitat and conservation restoration strategy that zeroes in on the priority locations in the watershed and the priority restoration actions needed to achieve results.

This strategy ensures the appropriate types of restoration actions are identified and implemented in priority sequence to address the primary changes and alterations in watershed processes responsible for the factors limiting salmon and steelhead production. Restoration actions identified for treating the root causes of impaired habitat conditions are considered higher priority in order to ensure the achievement of greatest long-term restoration benefits. This is in contrast to implementing short-term actions that treat only the symptoms of aquatic habitat impairment.

What organizations make up the Sandy River Basin Partners?