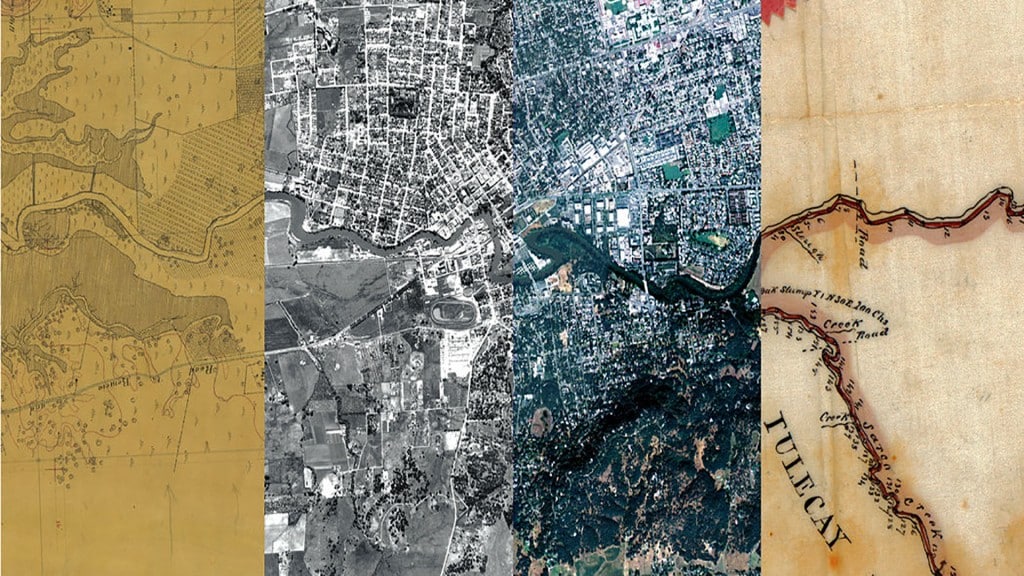 A map, two aerial photos and a land survey showing different stages of the area around the Napa River and the city of Napa, Calif., in (from left) 1858, 1942, 2009 and 1858. Credit Composite by Ruth Askevold/San Francisco Estuary Institute; from left to right: National Oceanic and Atmospheric Administration, U.S.D.A., U.S.D.A., Courtesy of The Bancroft Library, University of California, Berkeley

Erin Beller and Robin Grossinger have one foot in the past and another in the future.

At the most basic level, these two are scientists with the San Francisco Estuary Institute (SFEI), one of California’s premier aquatic and ecosystem science institutes. Peel back a layer and you’d find that they’re historians, archeologists, detectives and Golden State explorers.

Grossinger and Beller are part of SFEI’s Resilient Landscapes Program, which conducts historical ecological research across California. Archival documents from long ago are gathered and studied to help inform the ways in which humans have interacted with their environment. The lookbacks are solicited by organizations statewide and for a variety of reasons.

SFEI uses a historical ecological approach to study the ways landscapes and watersheds have changed over centuries. Their discoveries guide and improve future restoration, planning and management decisions.

“It’s hard to restore something if you aren’t sure what’s been lost,” said Grossinger. “It became clear quickly that so many of us only knew a bit about these ecosystems that we all cared about a lot.”

Now, maps, photographs, journals and newspapers are providing the team with insight into the past and drawing a roadmap of where to go next. 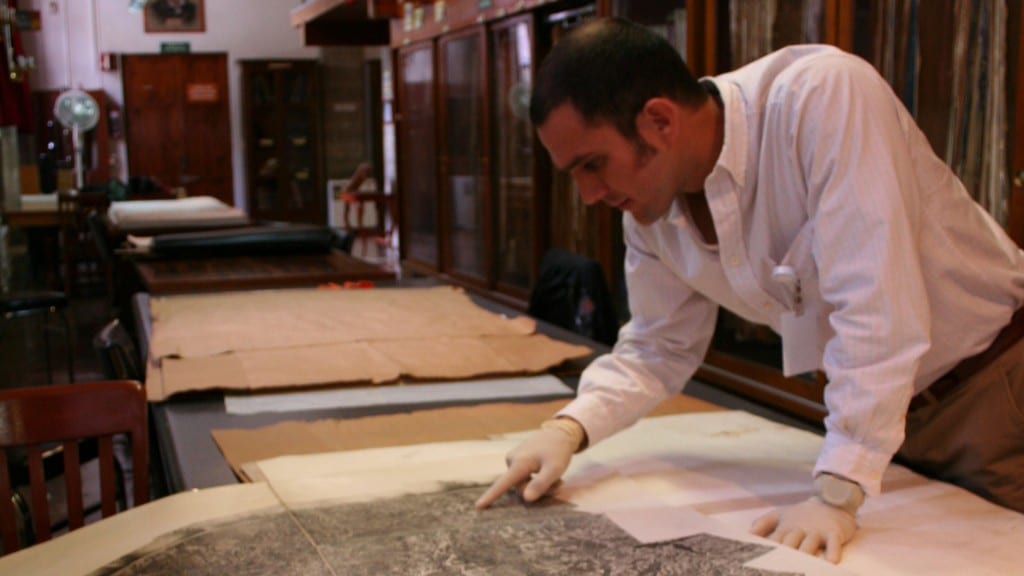 “We use anything we can get our hands on,” said Beller. “There are amazing surveys from the early 20th century that are comprehensive and scientific. But there are also idiosyncratic documents – a photograph of an old bridge, or diary entries from Spanish explorers and farmers. Piecing all these disparate sources together is like CSI for scientists – you need to figure out how they work together and tell a story about a watershed. This is both the pleasure and challenge.”

Most of the pieces collected are digitized and fed into a database. Akin to missing puzzle pieces swept under the couch, they’re used to fill in a forgotten picture.

“It gives a conceptual model for how a system should ideally work,” said Grossinger.

Over time, ecosystems have been dramatically simplified to accommodate farming, suburbs and cities. Many rivers were straightened and native vegetation stripped away.

“By looking back in history, we’re able to better understand what made landscapes more resilient, what allowed them to endure weather and fire, flood and drought,” said Grossinger. “Now it’s about figuring out how we can restore certain attributes that would lead to a more resilient system into a contemporary landscape.”

SFEI has mapped approximately two dozen systems throughout California and recently began looking at the Tijuana River in Mexico.

But perhaps the better indicator of the historical ecology team’s impact would be the on-the-ground restoration efforts that their efforts spur.

“One of the neat things about the studies that we do is that they inform so many different projects, policies, and programs,” said Grossinger. “What we’re doing is informing tens of millions of dollars of work and changing the course of that work.”

Grossinger’s team has advised restoration strategies for San Francisco Bay, the Sacramento-San Joaquin Delta, urban landscapes such as the Google campus, and rivers throughout California.

He explained one of his most gratifying moments during a study of the Coyote Creek watershed. He found landscape format photos from 1916 of a wetland being dredged. The photos answered the question about why the land was still wet more than 100 years later and gave insight into the historic vegetation and the depth of water.

“What we were looking at were some of the last moments of the wetland,” he said. “With discoveries like this, we’re able to identify very specific opportunities for restoration.”

Beller shared finding a document with entries from more than a dozen landowners detailing the flow of Alameda Creek year after year as part of a legal case over water rights. The testimony ended up being used to document historical flow patterns in the creek.

“Here were all of these descriptions about hydrology and how the flow had changed over seasons,” she said.

In January, the team was featured in the New York Times for their long-time effort to map the Napa River, which was straightened and deepened in the 20th century. These actions had led to serious flooding in downtown Napa.

“Like nearly every other system, the Napa had been highly modified,” said Grossinger. “Agriculture, urbanization and even deforestation to some extent played a role.”

For more than a decade, Grossinger and the historical ecology team have collected photographs, maps and even a painting from 1880. One at a time, the pieces would reveal the winding river of years past and become a clarion call for restoration.

“There is a strong sense of place in Napa,” he said. “Today there’s an array of stakeholders and citizens working to restore the original functions of the valley and to recover the river and preserve its role as a salmon and steelhead fishery.”

Yet some puzzle pieces seem to be further under the couch than others.

The team travels to archives, county libraries and historical societies and pores through online records. Like investigators on a murder, they’ll snap photos of clues, gathering everything they can before heading back to the office.

The tedious search makes the perfect find all the better.

Beller recounts discovering boxes of maps in a basement in Ventura County a few years back. Having not been seen for more than half a century, their rubber bands disintegrated under her touch.

“It was an amazing moment,” she said. “And the thing is, there’s always more.”

More to discover, and to do after the maps have been created. Review, interpretation and then of course, the on-the ground dirty work that improves watersheds and restores what might have been lost.

“It’s like we have double vision,” said Beller. “This window into the past gives us an idea of how much we’ve changed things and what we have an opportunity to save.”

This article is part of the spring 2016 edition of freshwater Magazine.