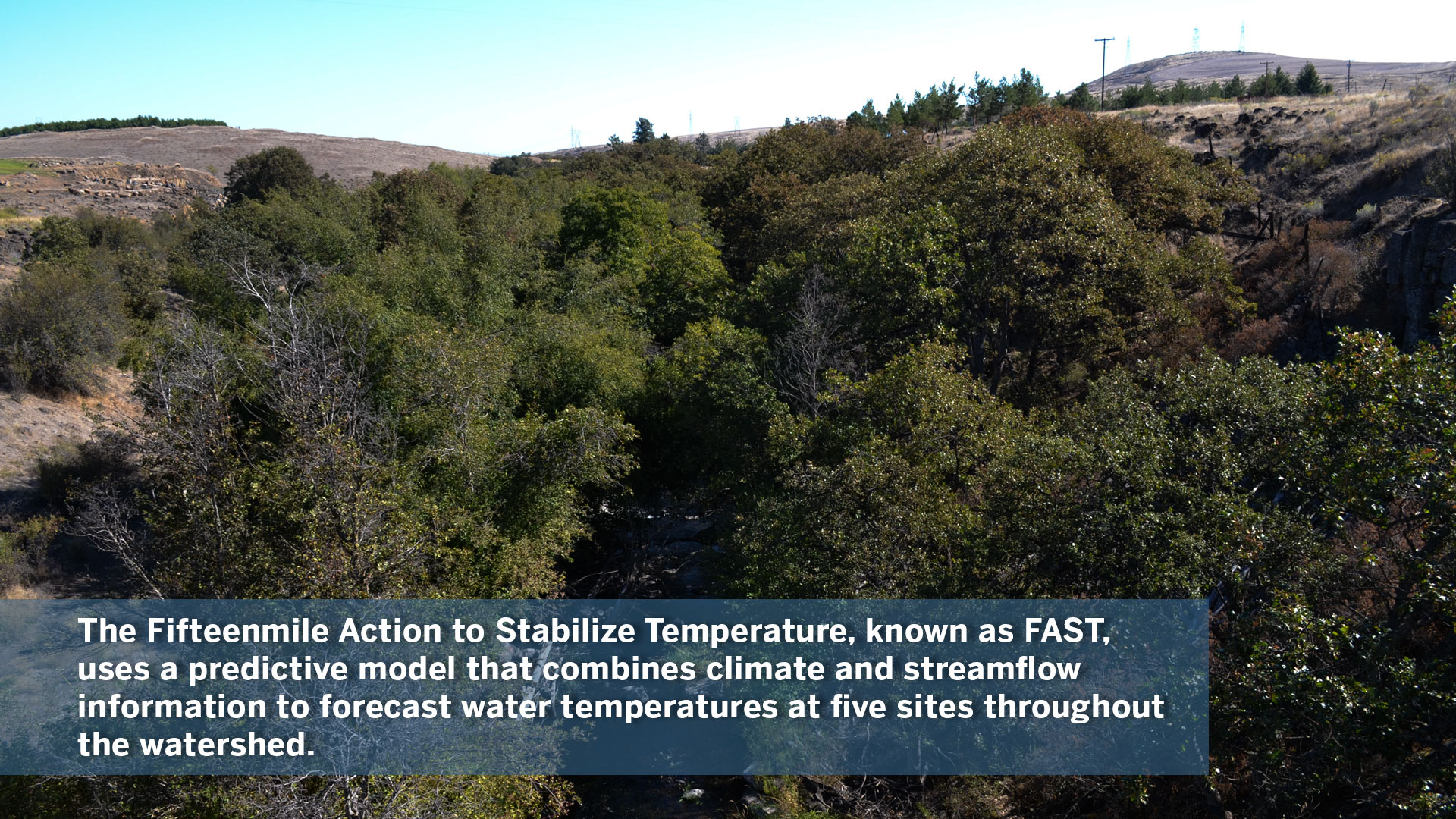 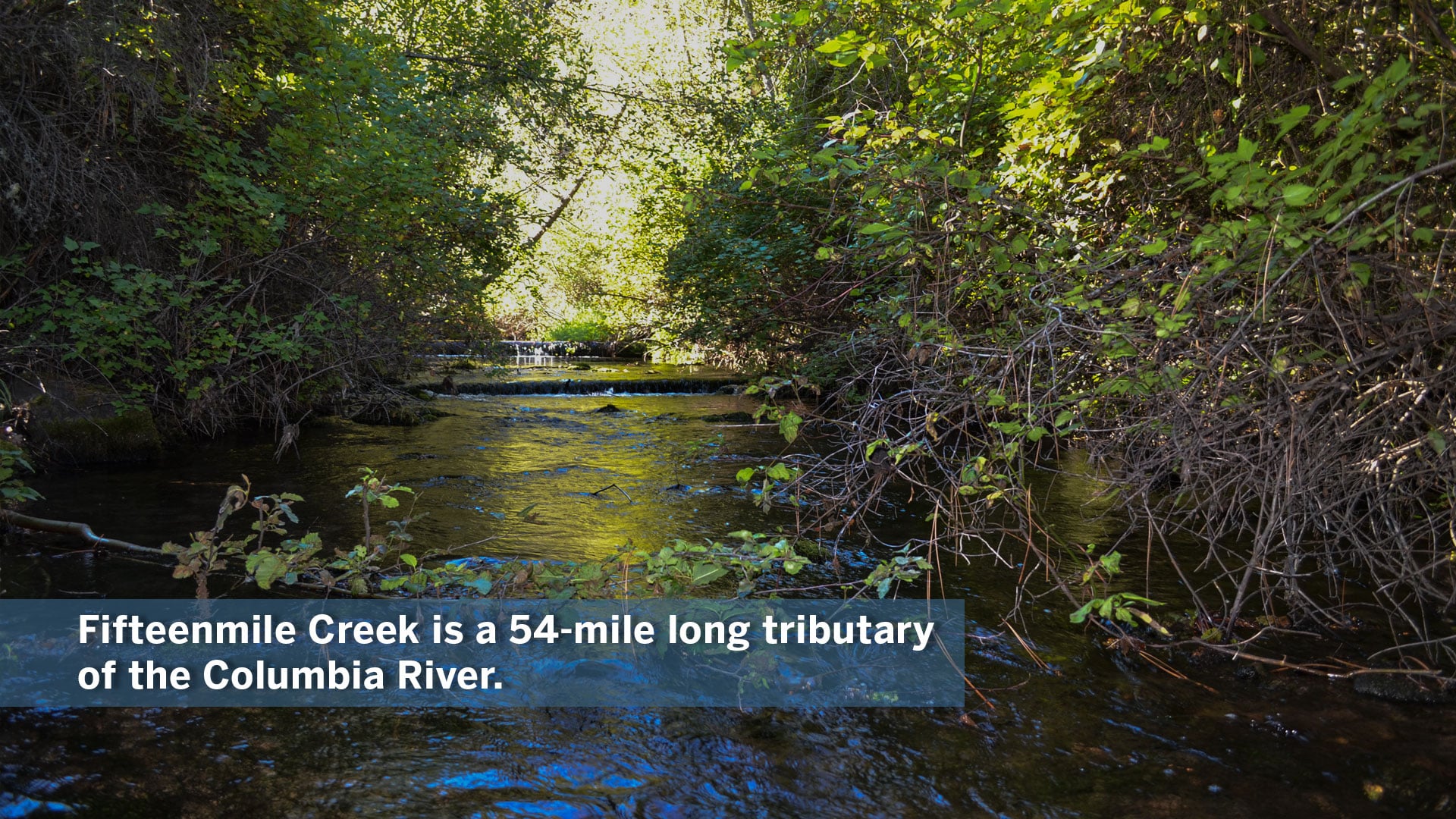 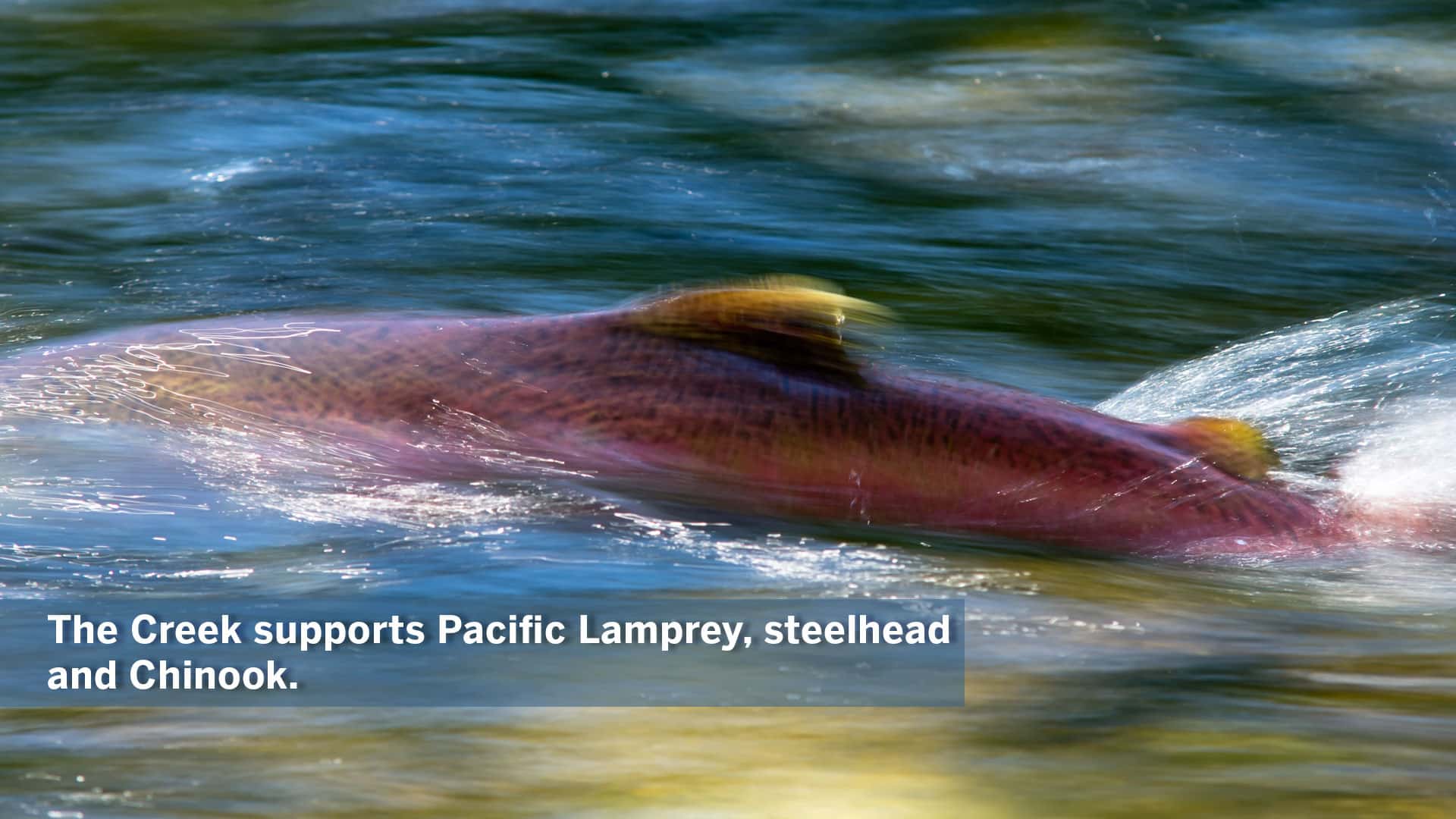 Fed by snowmelt from the flanks of Mt Hood, the 54-mile long tributary of the Columbia River has long supported anadromous fish. But that summer, there was a shortage of the cool water that lamprey, steelhead and Chinook need to survive.

During a stretch of hot, dry weather, flows plummeted. Stream temperatures climbed into the lethal range. Thousands of juvenile fish were killed.

Under the Endangered Species Act (ESA), people can be held civilly and criminally liable for any activity that harms listed species.

So the fish kill prompted local farmers, state agencies, nonprofits, and members of the Fifteenmile Watershed Council to explore options for improving water quality and quantity, while still keeping their irrigated farmland productive.

“Conservation and agriculture depend on the same limited resources, but they don’t have to be competing,” said Caylin Barter, flow restoration director with The Freshwater Trust. “A good flow project balances the needs of fish with the bottom line of agricultural operations.”

The solution implemented in 2013 did that.

The Fifteenmile Action to Stabilize Temperature, known as FAST, uses a predictive model that combines climate and streamflow information to forecast water temperatures at five sites throughout the watershed.

When the model predicts stream temperatures lethal to ESA-listed threatened steelhead — 72 degrees or higher — at two or more sites for two or more days, the locally based flow restoration coordinator initiates an automatic phone alert to irrigators, notifying them of a need to reduce diversions and keep more water instream.

Irrigators’ participation is voluntary, and they’re compensated according to the quantity of water they leave in the stream. And because almost every diversion on Fifteenmile Creek is metered, agricultural producers are able to accurately measure and report their water use — or in this case, lack thereof.

“High temperatures and low flows both negatively impact fish, and juveniles are at particular risk during hot and dry summers,” said Barter. “Using stream temperature as a trigger, FAST puts additional water instream when young fish need it most.”

During the first year of the FAST alert system in 2013, at least seven irrigators cut back during alerts to help fish survive those critically hot days. In 2014, that number jumped to ten. The Freshwater Trust applied the Water Temperature Transaction Tool and found a modeled temperature reduction of 1.6 degrees fahrenheit from the increased flow.

And in 2015, there weren’t any fish kills, despite two temperature alerts spanning 16 days in June and July.

This methodical approach to conservation is defined as Quantified Conservation. This is the method of using data and technology to ensure that every restoration action has a positive environmental outcome.

“It’s difficult to say that the actions of these irrigators were the single factor that prevented a fish kill,” said Barter. “But the program certainly helps, and it should reduce liability for the participating irrigators if another low-flow, high-temperature event harms ESA-listed fish.”

The National Oceanic and Atmospheric Administration agreed and honored the Fifteenmile Watershed Council with a certificate of appreciation after the first season.

“This award was a recognition of collaboration,” said Barter. “A group of people saw a problem and a way to come together to fix it.”

“What’s been done in Fifteenmile is replicable in watersheds elsewhere,” said Barter. “It’s important we start realizing that agriculture and conservation can – and must—work together if the waterways in our communities are to be healthy and thriving.”

How will enrolling in FAST affect my water right?

Enrolling your water right for instream use under FAST will have no permanent impact on your water right. Participants sign a contract with The Freshwater Trust agreeing to shut off diversions when an alert is in effect in exchange for compensation.

How long do I have to enroll for under FAST?

What are the benefits for me as a landowner?

In addition, The Freshwater Trust provides financial incentives, making FAST participation an easy, flexible way to enhance your income while benefiting the Fifteenmile Creek watershed. Under FAST, compensation ranges from $9/acre to $51/acre and is based on your water right’s priority date (senior water rights are paid at a higher rate than junior water rights).

When do alerts occur and how long do they last?

Alerts typically occur between May and August and can range from a single day to a week or longer. The longest alert to date took place in 2015 and lasted 14 days.

What are the options for enrollment?

Option 1 participants are compensated upfront, but are required to shut off during temperature alerts. Payment occurs are the beginning of the season and is based on the acres enrolled and the number of alert days likely to occur based on the priority date of the water right. Compensation ranges from $9.45/acre to $51.82/acre depending on water right seniority.

Option 2 participants retain the ability to choose whether or not to reduce diversions during a temperature alert. Payment occurs at the end of the season based on the number of gallons curtailed, capped at the payment available under Option 1. All water rights that have not been regulated off at the time of the temperature alert are compensated equally at $0.0004/gal in June and $0.0003/gal for July through September.

Where does the funding for the program come from?

Funding for this program is provided by grants from the Oregon Watershed Enhancement Board and the Bonneville Power Administration (BPA) through the Columbia Basin Water Transaction Program (CBWTP).

Does putting a small amount of water into a small stream really help?

Yes. Although it may not look like much, restoring flow to small streams often brings the most benefit for fish species. Small tributaries are needed for many parts of a fish’s life cycle, including spawning and rearing. FAST enhances flow and helps protect fish from lethal water temperatures.